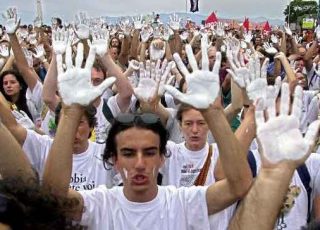 At Demonstrators’ Camp, a Unity of Spirit Is Seen

Demonstrators march in the streets as police move in amidst clouds of tear gas rising into the air during the second consecutive day of clashes between police and demonstrators in Genoa. (AP)

GENOA, Italy, July 21 — At 7:30 a.m. today at the Piazzale Kennedy, demonstrators were rising from a multicolored sea of sleeping bags, spread among hundreds of empty water and beer bottles and soft drink cans.

When Sergio Bontempelli awoke, quite a few others already were getting ready for the demonstration, the big one against the Group of Eight summit that everyone had come for.

He didn’t have anywhere to wash, and there were only about 20 portable toilets for the 3,000 people, mostly young, who had been sleeping, eating and planning in the piazza by the sea for the last three days in anticipation of the march. Lines began to form before the few concession stands selling cappuccino, sandwiches and beer.

Bontempelli, a slender 29-year-old with black wire-rimmed glasses and a brainy look, took a reporter around the impromptu campground and talked about the wake-up call he and many others hoped to send to the presidents and prime ministers meeting here — and about the solidarity the message has forged among the thousands of demonstrators.

From the water and fruit donated by Manu Chao, the Spanish musician-hero of the anti-globalization movement who played in the piazza Wednesday night, to the booth giving away bedding for sleeping in the open air, the demonstrators who came to Piazzale Kennedy found a unity of spirit.

“Here there is always someone who will give you water, give you something to eat, a cigarette, share whatever they have,” said Bontempelli, a student and humanitarian aid worker. “I’ve felt so many things over these last few days: anger, fear, sadness. But I’ve never felt lonely.”

Today’s march began noisily and peacefully, but turned ugly when violent protesters mixed among the crowd, throwing empty bottles and rocks when they were close to the police line. Police were at nearly every corner and responded with tear gas, forcing the march to detour from its planned route. About 228 people were injured.

[Early Sunday, police raided the headquarters of the umbrella group behind the demonstrations, detaining some activists and seizing equipment, news services reported.]

Protesters descended on this northern city to reinforce a message they have delivered to previous gatherings of world leaders, corporate chieftains and international bankers over the past 18 months: The costs of globalization are too high, enriching big business while depriving the poor and despoiling the environment.

The vast majority of demonstrators were peaceful, with serious criticisms about the way wealthy Western countries have conducted the process of globalization. “We don’t like to be called anti-global. We’re just the opposite. We’re pro-global: globalization of human rights, of opportunity, of freemovement for everyone,” Bontempelli said.

Bontempelli came, he said, “because I believe there’s a whole different way of living and thinking about other people in the world, and that it can’t all be decided by eight men.”

The protest movement suffered its first fatality on Friday: a 23-year-old demonstrator named Carlo Giuliani, who was killed when a police officer opened fire as the police were surrounded by protesters. The Interior Ministry has opened an investigation into the shooting of Giuliani, who police said had a record and had been detained in previous demonstrations.

Like many other pacifist demonstrators, Bontempelli said the sometimes brutal battles between tear gas-lobbing police and rock- and molotov cocktail-throwing extremists were the fault of both.

“I’m afraid of the police,” he said, “but maybe even more by the ‘neri’ ” or members of the “Black Bloc” — the name given to instigators who come equipped with black kerchiefs or balaclavas, often wear black clothes, and carry wooden or iron sticks, bottles and rocks to throw at police to provoke a charge.

Bontempelli, a philosophy student at the University of Pisa, also works for Africa Together, a group that helps immigrants in Italy. Most people in “the movement” are similarly involved, some dealing with the environment, some with human rights, some with the homeless, Bontempelli said.

The movement, he noted, is driven by the Internet. “We use the Net for everything, to send out e-mails if we need information, to find out about events or demonstrations. Instructions about what to bring to Genoa, how to act in a demonstration, what to do if someone gets arrested, all gets passed over the Internet.” It allows different groups to keep in touch with, help and contribute to each other’s causes, he said.

“What is the movement?” he asked. “It can’t be defined, it can’t be labeled, and that’s the really great thing about it.”

Bontempelli grew up in Pisa, the son of high school teachers who were involved in far-left parties in the 1970s and ’80s. He went to party meetings and participated in demonstrations and marches. At a certain point, he said, he grew tired of political talk.

“I wanted to do something more concrete, not be pigeonholed into a certain way of thinking, like with a political party. Now I can really make a contribution to help people, and even though it’s a lay organization, I work daily with Caritas [a Roman Catholic charitable organization]. There are no borders, there is no ideology to follow. Before, you were labeled a Communist, or a radical, or some other party name. That’s gone in this movement; it’s a whole new way of thinking.”

In Genoa, several hundred groups gathered under the aegis of the Genoa Social Forum, which called for today’s demonstration, a legal march from one part of the city to the next.

Authorities designated a “red zone,” the area around the summit site, dividing it from the rest of the city with high iron barriers and massive police presence at every entrance. Some protesters decided to try to break into the red zone on Friday to manifest their anger at being shut out of Genoa and at having their right to demonstrate hampered. Plans to push the barricade open were foiled by authorities with a show of police force at the entrances.

Bontempelli explained how the pacifist groups exchange information, with training on how to behave in a demonstration. They are instructed to put up both hands at any encounter with the police, keep their ground and keep each other in line.

“You can imagine what kind of determination it takes to keep the people calm when the police are nearby,” Bontempelli said. “Just one person throwing a bottle can set off an inferno.”