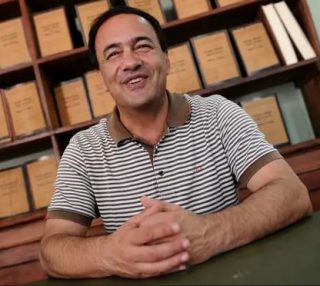 The mayor of an Italian town that has won praise and TV publicity for integrating thousands of refugees has been placed under house arrest on suspicion of abetting illegal migration.

Riace mayor Domenico Lucano – hailed in 2016 by Fortune magazine as one of the world’s 50 greatest leaders – is also accused of fraudulently awarding contracts for waste disposal as well as organising “marriages of convenience” between local men and foreign women.

His partner, Tesfahun Lemlem, faces the same charges and has had her residency blocked.

The investigation against Lucano began more than a year ago, although more serious allegations of embezzlement and fraud were dropped.

It also follows the suspension by the public broadcaster, Rai, of a TV show about Riace, which had been lauded as an exemplary model for integration.

Salvini shared news of Lucano’s arrest on Twitter, alongside a comment that also made a dig at the anti-mafia author, Roberto Saviano, a staunch critic of his policies. “Damn, who knows what Saviano and all the other do-gooders who want to fill Italy with immigrants will say now,” the far-right League leader wrote.

The Guardian was unable to reach Lucano for comment. His migrant integration project began more than a decade ago as a way to repopulate and revive the economy of the Calabrian town whose population by 2004 had dwindled to 500 from about 3,000 before the second world war.

Thousands of migrants are estimated to have passed through since then, with about 500 making up today’s population of 1,500.

Gioacchino Criaco, a writer from Calabria who knows Lucano well, said he foresaw the mayor’s arrest even before the investigation began. “He showed how it was possible to do concrete things with limited means,” Criaco said.

“Efficiency and humanity are not welcomed in a cynical system. This is a system that only takes consensus from politics of fear. In this respect, examples of virtuousness must be eradicated.”

Criaco said Lucano was an honest man but that the “rules on the reception and management of migrants are too tangled, and often administrators can find themselves caught in a dilemma between a humanitarian choice and a legal one”.

Salvini has cracked down on immigration since becoming interior minister in June, closing off the sea ports and pledging to “end the gravy train” for those working in the migrant reception business.

Lucano received a show of support on his Facebook page, with Riace locals calling on each other to rally together in solidarity.

Sergio Bontempelli, a migrant rights campaigner with the Association of Rights and Borders, said that Riace had become too well known as an example of good integration and had been under attack for years. He said other integration projects undertaken by hundreds of people in other Italian towns were now at risk.